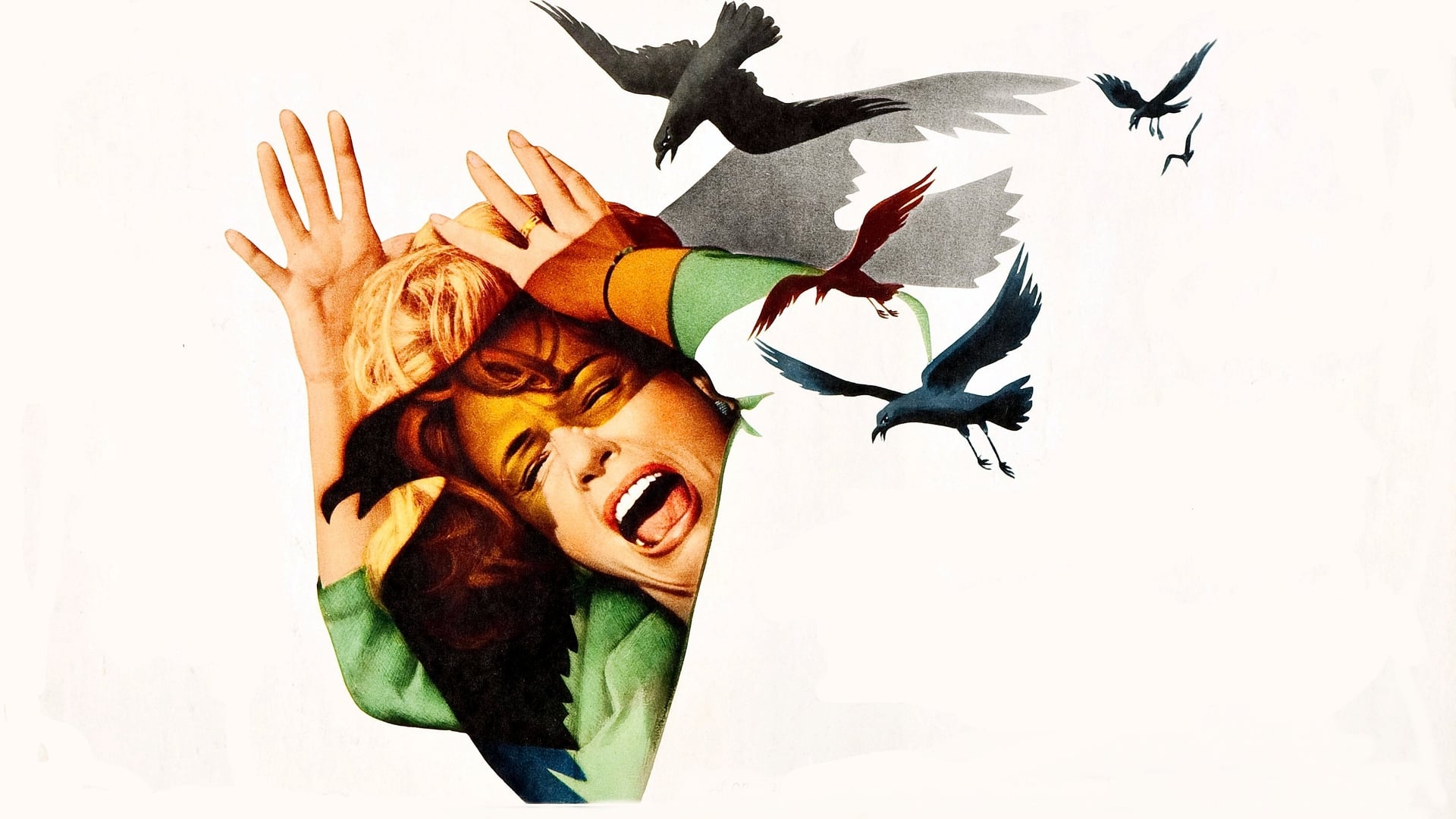 The Birds is a 1963 American natural horror-thriller film produced and directed by Alfred Hitchcock. Loosely based on the 1952 story of the same name by Daphne du Maurier, it focuses on a series of sudden and unexplained violent bird attacks on the people of Bodega Bay, California, over the course of a few days.

The film stars Tippi Hedren in her screen debut, alongside Rod Taylor, Jessica Tandy, Suzanne Pleshette and Veronica Cartwright. The screenplay is by Evan Hunter, who was told by Hitchcock to develop new characters and a more elaborate plot while keeping du Maurier’s title and concept of unexplained bird attacks.

In the early 1960s, at a San Francisco pet store, socialite Melanie Daniels meets lawyer Mitch Brenner who is looking to buy lovebirds for his sister Cathy’s 11th birthday. Recognizing Melanie from her court appearance regarding a practical joke gone awry, Mitch pretends to mistake her for a shop employee. Mitch tests Melanie’s knowledge of birds, which she fails. He discloses his prior knowledge of her and that his ruse was intended to make her appreciate being on the other end of a joke.

Mitch leaves without buying anything. To make amends, and finding him attractive, Melanie buys the lovebirds and drives to Bodega Bay, after she learns Mitch has gone there for the weekend to his family’s farm. Melanie is directed to the local teacher, Annie Hayworth, to learn Cathy’s name. Annie previously dated Mitch, but ended it due to Mitch’s cold, overbearing mother, Lydia, who dislikes any woman in Mitch’s life.

In town, Melanie rents a boat and crosses the bay to discreetly leave the lovebirds at the Brenner farm. Mitch spots Melanie during her retreat and drives into town to meet her at the dock. As Melanie approaches the wharf, a gull attacks her. Mitch tends her head wound inside the cafe. Lydia arrives, meets Melanie, and Mitch announces to Lydia that he is inviting Melanie to dinner. Melanie returns to Annie’s house and asks to spend the night. At the farm, Lydia’s hens are suddenly refusing to eat. Lydia expresses her disapproval of Melanie to Mitch, due to her exaggerated reputation as reported in gossip columns. Mitch calls Melanie and invites her to Cathy’s birthday party being held the next day. Shortly after, there is a violent thud at Annie’s front door. A dead gull is found at the threshold.

At Cathy’s party, Melanie privately tells Mitch about her troubled past and her mother running off with another man when Melanie was Cathy’s age. During a game, the children are attacked and some injured by gulls. The following evening, as Melanie dines with the Brenners, sparrows swarm the house through the chimney. After, Mitch insists she delay driving back to San Francisco and stay the night. The next morning, Lydia visits her neighbor to discuss why their chickens won’t eat. She discovers his eyeless corpse, pecked lifeless by birds, and flees in horror. As Lydia recovers at home, she fears for Cathy’s safety, and Melanie offers to pick her up at school. As Melanie waits outside the schoolhouse, a large flock of crows slowly engulfs the jungle gym behind her.

Anticipating an attack, she warns Annie. As they evacuate the children, the crows attack, injuring several children. Mitch finds Melanie at the restaurant. Outside, when a gas station attendant is attacked by gulls, Mitch and several other men assist him. Spilled gasoline ignites causing an explosion. During the escalating fire, Melanie and others rush out. More gulls attack, and Melanie takes refuge in a telephone booth. Mitch rescues her and they get back inside the restaurant. A distraught woman blames Melanie for the attacks, claiming they began with her arrival.

Mitch and Melanie go to Annie’s house to fetch Cathy. They find Annie’s body outside, killed by the crows while protecting Cathy. That night, Melanie and the Brenners barricade themselves in the family home, which is attacked by waves of birds that nearly breach the boarded-up doors and windows. During a lull, Melanie investigates a fluttering sound in the attic. After discovering that the birds have pecked their way in through the roof, they violently attack Melanie, trapping her until Mitch pulls her out.

Melanie is badly injured and traumatized; Mitch insists they all drive to San Francisco to get Melanie to a hospital. As Mitch readies Melanie’s car for their escape, a menacing sea of birds has quietly gathered around the Brenner house. The car radio reports bird attacks on nearby communities such as Santa Rosa and the military may intervene. Cathy retrieves her lovebirds (the only birds who do not attack) from the house and joins Mitch and Lydia as they carefully escort Melanie past a mass of birds and into the car. The car slowly drives away as thousands of birds are ominously perching.